TraditionsLearn more about how we celebrate a loved one's life. 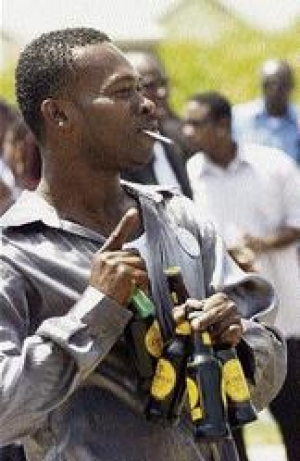 LOADED: This man was loaded with liquor at the funeral service for the four family members killed in a motor vehicle accident, in Clarendon, in June 2006. - File

The following article was submitted by The Public Theology Forum, an ecumenical group of local ministers of religion and theologians. In Jamaica we've noticed that funerals are increasingly becoming centres for entertainment and revelry. Dance-hall lyrics are recited in processions, and at some cemeteries the latest dancehall music is played from massive speakers. In some respects this is not dissimilar to the jazz funerals in New Orleans, where the band accompanies the mourners to the cemetery. But most of the lyrics in the Jamaican popular culture neither have relevance to the Bible nor pretend to manifest a theological dimension. There seems to be a clash between the cosmology of popular culture and the understanding of transcendence. Historically, we are aware that popular culture inculcates elements of African retention, or depicts a type of hedonism, which is recorded in Ecclesiastes 3:12-14 -"I know that there is nothing better for men than to be happy and do good, while they live. That everyone may eat and drink, and find satisfaction in all his toil - this is the gift of God." There seems to be an adoration of the flesh devoid of a divine relationship. As we observe in many African rituals, Jamaicans place various articles in the coffin or in the vaults. These are chillum pipes, knives, ganja, money, drinks, guns, bullets, jewellery. Recently, clergy persons admitted that people are putting cellular phones in coffins, which disturb the service. It is not only that people are desirous of discovering if the dead will speak to the relatives, but, if they could learn the number that will be revealed in the various gambling exercises in Jamaica.


Ostentatious consumerism This Jamaican popular cultural tradition cannot be similar to African cosmology, which guides their spirituality, but, portrays ostentatious consumerism. There is evidence that persons who attend some funeral put US$5,000 in the grave and then it is removed the day after. This does not resemble the African spirituality where gifts are to be shared with the spirit. There is a theology of the market where nothing is sacred, nothing is permanent and all things are relative. This situation challenges the Church that we have a mission to declare what is our pastoral, biblical and theological response. As we critically scrutinise the funerals of popular Jamaican culture, we ought to be mindful that, having Ghanian ancestral heritage there are interesting similarities. Of course, funeral rites in Jamaica reflect a wide variety of cross-cultural diversity. However, there are cultural universals that have remained consistent in funeral services - communicating the death, care of the deceased, a method of burial, a ceremony or ritual and sometimes there are memorials which are repeated annually, with much fanfare. In the Jamaican mosaic there is a mixture of European, Chinese, Indian and African cultures which find expression in popular culture. Jamaican funerals reflect some ancient practices that are as old as the human race, because we know that in the Shanidar cave in Iraq, Neanderthal skeletons have been found with a layer of pollen, which implies that Neanderthals buried their dead with gifts of flowers, and the evidence is that Neanderthals believed in an after life, and is said to be cognisant of their own mortality and were capable of grieving. For many Africans the grave is a very powerful point of contact between the worlds of the living and the dead. The grave traditions of the Bakongan culture have survived in Jamaica, where a variety of objects were placed on the Bakonga graves to assist spirits in their journey, thus discouraging spirits from returning to taunt the living. These artefacts included items owned by the deceased such as clocks, food, dishes, coins, shoes, and other items which were broken to liberate the spirit. There are all types of rules which govern how the dead are buried, what they should wear, and what food they should take with them, which echo the funeral traditions of ancient Egypt, where death is a journey and one must be equipped for that route. Burial is linked to the family and community, so the Uganda Bagandas prepare a grave for each individual wherever there are children, while others bury members of the family in one grave. The Dahomean and Yoruba Cultures of West Africa use dance and music to reflect that death is a way to the realm of the spirits. Rejoicing at death is used by some African Americans to respond to a life of enslavement and oppression, and so they view death as an emancipatory experience. Theologically, it is necessary to understand African cosmology and theology, which have survived enslavement, in that, aspects of African retention are part of our psyche. Africans believe that death is not the end of life, but, is realised in an active and vibrant spirit life. African belief systems are monotheistic, hierarchical and creational (do not separate matter and spirit). People who died are raised to a status of spirit and tend to overpower those who are alive. It is in this context, that the rituals and customs of a proper burial are important in African cosmology. African funeral rituals In analysing the role of popular funeral culture in Jamaica, it is necessary to look at a variety of African funeral rituals that have been retained, especially the Akan funeral customs. Akans are the largest cultural group/clan in Ghana and many Jamaican ancestors originated from Ghana. The intricate workings of the Ayie, Akan Funeral rites, are representations of the Akan cosmology, which assists them in understanding their ancestral/spiritual culture, and the cosmology/philosophy, that is how Akans attempt to make sense of reality in the universe. The cosmology provides a spiritual base for ritual practices associated with death and burial ( according to the Dept of African Studies, Temple University-2003). We should also remember that the Akans have an elaborate burial ceremony because it is thought that the condition of the deceased in the other world is determined in part by the treatment he/she receives from the relatives and friends. Therefore, in many instances the Christian Church (Ghana) has to reach a consensus with the membership to participate in the funeral without adapting animistic spirituality. Studies have been done which seek to articulate The Death and Funeral Rites in Contemporary Akan Society: An Appropriate Christian Response by Samuel Twumasi Ankrah.2002. It is very revealing that popular Jamaican funeral culture has its own cosmology and seems to be borrowing from the Akan cultural world view, that a meaningful life is found in maintaining harmony with the spirit of the dead relatives - the 'living dead' Ankrah gives a picture of the Akan's view if death which resembles some aspects of our popular funeral culture."


Among Akans it is a norm for dead bodies to be kept in the mortuary for weeks or months until preparations are adequately organised to give a fitting ceremony to the departed soul. Such preparations normally take the form of an expensive coffin, shroud, food and refreshment for invited guests, provisions of music usually by a hired band, publicity on radio and television, etc. Where necessary many do take loans purposely to cater for all these expenditures. This is so especially, if the deceased had a good standing relationship with the circle of associates prior to his/her death. Sympathisers mobilise financial donations for attending the funeral regardless of the distance. Pastoral and theological respinse This response is not in the context of ridiculing anyone, but, to share some valuable biblical, pastoral and theological insights. The Christian teaching concerning life after death is that we not need material objects in the afterlife. This prayer is very instructive: "Through Jesus Christ our Lord, who rose victorious from the dead, and comforts us with the blessed hope of life eternal. For to your faithful people O Lord, life is changed not ended, and when our moral bodies lie in death, there is prepared for us a dwelling place eternal in the heavens." Jesus is telling us as recorded in John 11:21-27, that to believe that He is the resurrection, means that physical death has no power over believers; their future is determined by their faith and not by objects in the coffin. Jesus is also reiterating that for Him to be the Life means that the believers will share in his gift of eternal life. Luke.24:1-12, is expressing the view that the grave is not the final reality for human experience, because Jesus was raised from the dead. We are summoned by Luke to be resurrected people and not to look "for the living among the dead". The Evangelist is indicating that the new Testament does not represent the fact that the death of Jesus would have been adequate for salvation apart from the resurrection. The two are fused together so that neither can be considered apart from the other. The resurrection of Jesus is God's response to the death of Jesus, and therefore, our resurrection is guaranteed, and our future secured. The Church has a pastoral responsibility to relate positively to the community, regardless of cultural diversity and African retentions; guide them how to use the 'nine night', the 'wake' and the various prayer meetings, creatively, to appreciate grieving, express feelings, healing and reconciliation, thus minimising lengthy Church tributes, so that simplicity will counteract consumerism in funeral services. Members of The Public Theology Forum are Neville Callam, Ernle Gordon, Roderick Hewitt, Stotrell Lowe, Marjorie Lewis, Richmond Nelson, Garnet Roper, Anna Perkins, Ashley Smith, Burchell Taylor, Karl Johnson, Wayneford McFarlane and Byron Chambers, coordinator.