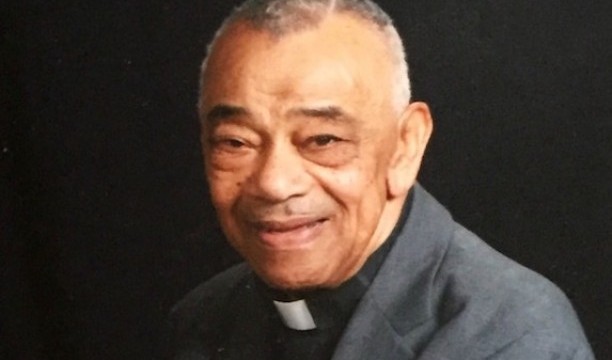 “Knight, If the Lord has called you, you have got to go!”  On March 7, 2017, the Lord Jesus issued his second call to the REV. DR. JOHN EDWARD NEWTON KNIGHT. At the age of 95 he was called to his heavenly home after a short, but aggressive battle, with appendix cancer.  As was fitting for this musician who loved the Lord and sought daily to give honor and glory to him, John departed from this world following the singing of a wonderful hymn of praise, How Great Thou Art. He was surrounded in love by his family and holding the hand of his beloved Hazel, his wife of over 60 years.
Born to James and Valjean (Campbell) Knight on December 15, 1921 in St. Georges, Grenada, he was one of eight children. John spent his youth between the islands of Grenada and St. Vincent before moving to Aruba for medical training.  During that time, from his office window he observed the sailors, drunken & partying and one day audibly heard the Lord’s first call: “they’re like sheep without a shepherd.  I want you to be their shepherd”.  After a long discussion, his medical school mentor advised “Well Knight if the Lord’s calling, then you’ve got to go.” He went to seminary in Jamaica and began a 75-year ministry as a Pastor in the United Methodist Church.
John married the love of his life, Hazel Yates, in Aug 1956 after a 4-day courtship that turned into a love affair for the ages. He said I prayed and I knew God had directed me to the perfect Godly woman with whom I could carry out His work. Together they traveled the world in service to the Lord. Most memorably serving churches in Jamaica, Cape Cod, the Greater New England area and Palm Coast, FL.  They raised two children, Peter (Florence) Knight of Boston, MA and Mary (Paul) Elzinga of Doylestown, PA.  John & Hazel traveled extensively with the children, making friends worldwide.
John was a brilliant and gifted musician and a lifelong learner. He holds degrees from London University, Oxford College, Caenwood Theological College, Harvard University, and Boston University.
In addition to his wife and children, John is survived by beloved grandchildren, Rachel and Rebecca Elzinga, Joshua Knight and great-grandson Tristan Knight.  He is preceded in death by his parents, siblings (Sydney, Pearl, Ruby, Leslie, Beryl, Lorna) and grandson, Raphael Knight.
John devoted his life to faithfully following his lord and savior, Jesus Christ.  Wherever God led him, he sought to be a pastor.  Not just a preacher, but a teacher, advisor, comforter, supporter and friend to all. He sought to be a loving reflection of Christ. He was called to be a shepherd and he answered that call with great abandon.   Well done John Knight, thou good and faithful servant!
The Family invites you to celebrate his life at a Service of Worship and Celebration on Saturday March 11th at the Doylestown United Methodist Church (320 Swamp Rd, Doylestown, PA). Visitation from 10:30-11:45 followed by service at noon.
In lieu of flowers, the family suggests donations to: The Preachers’ Aid Society of New England.
To share your fondest memories of John, please visit www.lifecelebration.com
Life Celebration services provided by Leaver/Cable of Buckingham, PA

My heartfelt condolences to the family of John. Losing a dear loved one is never easy. A comforting thought is one found at Isaiah 26:19 which says "your dead will live." This means that those who have fallen asleep in death will see life again.

I would like to extend my sincere condolences to your family. Death is such an enemy. May the God of comfort be with you at this time. 2 Corinthians 1: 3-6

If a man die, shall he live again asked the man Job long ago. Job 14 vs14, Rest assured that a reunion with is possible right here on earth under the best of conditions. The Bible makes the promise Your dead ones will live. They will rise up. And t

Please accept my condolences for the loss of your dear loved one. May you all find comfort in God's word 2 Corinthians 1:3,4. And put confidence in the hope of a resurrection . Isaiah 26:19; John 5: 28

Sincere sympathy on the passing of your beloved John. My parents Brinkman and Amy are gone now, but they always looked forward to being in touch with him. Rest in Peace, Rev. Knight.

Please accept condolences from myself and my family on the loss of your loved one Dr.John, remember that God as resurrected humans in the past,his words reports eight instances of humans young,old, male, female, who were bought back to life on earth.

My deepest condolences to the Knight Family The Bible often compares death to sleep. (John 11:11-14) God can awaken the dead, just as we can awaken a person from sleep.—Job 14:13-15.